Since our work is constantly the target of gendered questions when this isn’t so for our male peers, we female comics creators have decided to gather to condemn sexist aspects of this literary field, and to put forward ways to fight them. Our collective regroups more than a hundred women.

◾ Given that « masculine comics » have never been narrowly defined or limited, it is degrading for women authors to be typecast as creating « female comics ». If such a tag stereotypes our work or thought process, then we, female comics creators, don’t recognize ourselves in it. Indeed, as much as our male peers are not obliged to refer to their « masculinity » when they design something, we aren’t obliged to refer to our « femininity ».¹
◾ « Female comics » is not a genre of storytelling. Adventure, science-fiction, thriller, romance, autobiography, humor, history, tragedy are genres of storytelling and women authors master them without having to be reduced to their sex.
◾ To define someone’s taste and ability by their biological sex is a prejudice that isn’t based on reality. Studies in neurobiology and experimental psychology prove that cognitive development is the same for both sexes.²
◾ The word « girly » only reinforces sexist clichés. We refute the idea that talking baking cupcakes or Sales is a « feminine » prerogative. To love shopping and/or soccer is not a sexed feature. Given that « girly » is mostly defined by the futility and/or « sentimentality » of a theme addressed, to decide that such features are « feminine » is misogynistic.
◾ To publish « for-women » collections is misogynistic. It creates polarization and hierarchy within literature, implying that everything that isn’t “for-women” is “for men”. Why should the feminine be outside the scope of what is universal? This sort of distinction, based on stereotypes, leads to nothing but negative effects on women’s self-perception, self-confidence and performance. This also holds true for men, especially if they feel attracted to what the authorities classify as « feminine ». As long as we maintain masculine as the norm and feminine as an inferior aside, children will continue to use terms like « girl » and « homosexual » as pejoratives in schoolyards.

IN SUPPORT OF A FEMINIST PROGRESS FOR COMICS FIELD

◾ « Feminist » is not an insult. Feminism struggles for women’s equality with men in our societies, being therefore anti-sexism, and we wish to promote literature that is more egalitarian.
◾ We encourage diversity of representation in comics. Authors and protagonist in the book industry ought to give more visibility to women, to diverse family structure, gay parenting, people of color, and socio-ethnic diversity.
◾ We expect institutions, publishers, authors, booksellers, librarians and journalists to assert moral responsibility in the diffusion of narrative material with sexist and, generally speaking, discriminative (homophobic, transphobic, racist, etc) features. We hope to see them promote literature that frees itself from ideology based on gender stereotypes.
◾ We encourage booksellers and librarians not to segregate so-called « for-women » books and books by female authors while organizing displays. The fact that female characters are more present or active than male characters in a book doesn’t mean that boys and men cannot identify with them or enjoy their story.
◾ We hope for authors, publishers and institutions to be attentive to the inner wealth that we all hold in ourselves. There is no hermetic divide inside us between masculine and feminine, except for what society and religions impose. There is inside everyone an endless supply between, around, and beyond these notions of masculine and feminine. This is our strength, and the literature shouldn’t be afraid of it.

1. Since « feminine » and « masculine » are sociocultural conceptions, we won’t pretend to give a partitioned definition to them.
2. See the studies on that topic on the page « liens ». 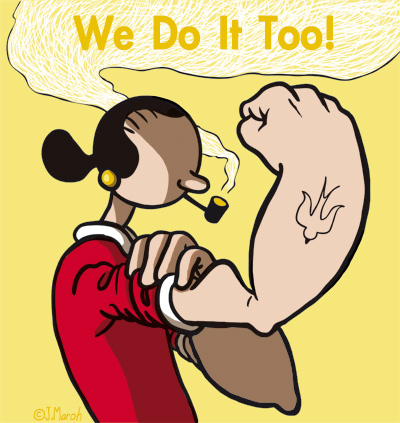